ALMANAC FOR THE BEYOND

Almanac for the Beyond is an edited volume of experimental eco-criticism. Providing a twist on the almanac tradition, this collection of essays, graphs, poems, art works, miscellaneous references, and more critiques the limits of the petroculture imagination, honors the rhythms of nature, and builds capacity to attend to contemporary environmental and societal change. The edifying, mystifying, editorializing and amaz-ifying contributions offer ways to see the weather (and the climate) “beyond" current and often damaging assumptions about what can and cannot be done to predict, fix, or modify it.  Beyonds are everywhere—moving towards new possibilities of regeneration and diverse futures.  Published by Tropic Editions 2019.

This book was initiated by the Banff Research in Culture Group at the Banff Centre for Arts and Creativity led by Imre Szeman and Eva-Lynn Jagoe in the Summer of 2018.  Its publication is generously supported by Future Energies System research project at University of Alberta.

For a printed copy please go to Tropic Editions.  For more information on the project, please contact Jaimey Hamilton Faris. 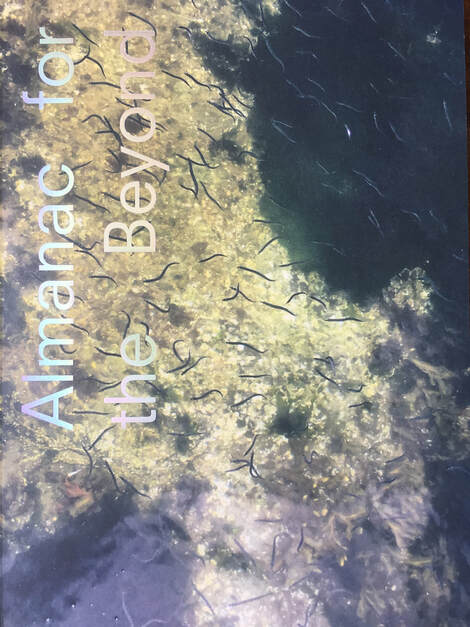 EDITOR
Jaimey Hamilton Faris is a critical theorist and contemporary art historian. She is Associate Professor at the University of Hawai’i﻿ at Mānoa and writes about new visual approaches to global systems, infrastructure and ecologies. She’s written articles for Art Journal, October, Art Margins and more. Her first book Uncommon Goods (2013), explores artistic responses to neo-liberal trade and her current book project, Liquid Archives, Liquid Futures: Art and Climate Change, proposes the importance of new liquid imaginaries in the era of climate change.

PUBLISHER
Tropic Editions is a 501(c)(3) non-profit publishing imprint that produces artists’ books and related publications imbued with a sense of place. By activating the climatic framework of the tropics to challenge the assumptions of Western geopolitical hierarchy, the imprint hopes to contribute to an existing global discourse on tropicality, postcolonialism, and creative production in the tropics. Based in Honolulu, Hawaiʻi, Tropic Editions is run by artist and designer Marika Emi.

CONTRIBUTORS
Jamie Allen is a Canadian-born artist and scholar, who investigates what technologies teach us about who we are as individuals, cultures and societies. He has been an electronics engineer, a polymer chemist and an exhibition designer with the American Museum of Natural History. He likes to make things with his head and hands — experiments into the material systems of media, electricity, and information as artworks, events, and writing. He attempts to recompose the institutions he works with in ways that assert the importance of generosity, friendship, passion and love in knowledge practices, like art and research. Allen is Senior Researcher at the Critical Media Lab in Basel, Switzerland, co-founder of the media, art and philosophy journal continentcontinent.cc and Canada Research Chair in Infrastructure, Media & Communications at NSCAD.

Gretchen Bakke is a cultural anthropologist. Her work focuses on the chaos and creativity that emerge during social, cultural, and technological transitions. She is a former fellow in Wesleyan University’s Science in Society Program, a former Fulbright fellow, and is currently a guest professor at IRITHESys at Humboldt University. Her book The Grid was selected by Bill Gates as one of his top five reads of 2016.

Jeremy Bolen is a Chicago and Atlanta-based artist, researcher, organizer and educator. He is a recent recipient of the PACT Zollverein Residency in Essen, Germany; Oxbow Faculty Artist Residency in Saugatuck, MI; and Center for Land Use Interpretation Residency in Wendover, Utah. Bolen currently serves as Assistant Professor of Photography at Georgia State University, is represented by Andrew Rafacz Gallery, Chicago and is a co-founder of the Deep Time Chicago collective.

Jenny Kendler is an interdisciplinary artist and environmental activist based in Chicago, whose work has been shown at venues including Storm King, MCA Chicago, Albright-Knox, Pulitzer Arts Foundation, MSU Broad Museum, California Academy of Sciences, the Chicago Biennial and the Kochi-Muziris Biennale. Since 2014 she has been the first Artist-in-Residence with environmental non-profit NRDC. Alongside an interdisciplinary team, she was recently awarded an Andrew W. Mellon Foundation grant for her community co-created project Garden for a Changing Climate. She is also a member of the Deep Time Chicago collective.

Louise Emily Carver is a geographer, political ecologist and anthropologist specializing in biodiversity conservation policy. Her research concerns the entanglements of moral, semiotic and economic value framings of nature at the science-policy interface of the so called ‘green’ economy. She currently lives on an upland sheep farm in the north of England and is managing director of the Uplands Project.

Ian Clarke is a book artist, printmaker, photographer, scientist and designer. Currently he is Interim Dean in the Faculty of Liberal Arts and Sciences at OCAD University. He has published numerous scientific papers on Brain Tumour Stem Cells and Genomics in international journals such as Nature, Cell Stem Cell and the Proceedings of the National Academy of Science. He has served as a board member and vice president of The Canadian Bookbinders and Book Artist’s Guild.

Sean Connelly is a Honolulu-based artist, urban ecologist, and architect. His works and research address the role of design in recovering ahupua‘a. Connelly operates both independently and collaboratively out of his studio practice After Oceanic (www.ao-projects.com) which pursues projects in the realms of architecture, landscape, infrastructure, and art. His most recent work includes the Ala Wai Centennial Memorial Project (www.alawaicentennial.org), an online exhibition on the past, present, and future of the ahupua'a of Waikiki.

T.J. Demos is an art historian and cultural critic. He is currently Professor of the History of Art and Visual Culture, University of California, Santa Cruz, and Founder and Director of the Center for Creative Ecologies. He writes widely on the intersection of contemporary art, global politics, and ecology and is the author of numerous books, including, most recently, Against the Anthropocene: Visual Culture and Environment Today (Sternberg Press, 2017) and Decolonizing Nature: Contemporary Art and the Politics of Ecology (Sternberg Press, 2016).

Katy Didden is a poet and educator.  Her first book, The Glacier’s Wake, won the Lena-Miles Wever Todd Prize from Pleiades Press (2013). Her poems and reviews appear in journals such as Poetry Northwest, Ecotone, Bat City Review, The Kenyon Review, Image, The Missouri Review, Smartish Pace, 32 Poems, The Spoon River Poetry Review, The Sewanee Review, and Poetry. She was a 2013-2014 Hodder Fellow at Princeton University, and is currently Assistant Professor of English at Ball State.

Anne-Lise François is a literature scholar.  She is Associate Professor of English and Comparative Literature at UC-Berkeley. Her current book project Provident Improvisers: Parables of Subsistence in the Time of Enclosures traces the contradictory logic of modern capitalism’s ways of enclosing time and stocking reserves, and looks to alternative, seasonal ways of living “without reserves” in various parables of subsistence. Essays related to the book have appeared in the collection Anthropocene Reading and in Qui Parle, Essays in Romanticism, Minnesota Review, and Postmodern Culture.

Jaimey Hamilton Faris is a critical theorist and contemporary art historian. She is Associate Professor at the University of Hawai’i﻿ at Mānoa and writes about new visual approaches to global systems, infrastructure and ecologies. She’s written articles for Art Journal, October, Art Margins and more. Her first book Uncommon Goods (2013), explores artistic responses to neo-liberal trade and her current book project, Liquid Archives, Liquid Futures: Art and Climate Change, proposes the importance of new liquid imaginaries in the era of climate change.

Eva-Lynn Jagoe is a writer and scholar. She is Associate Professor of Comparative Literature and Latin American Culture at the University of Toronto. She teaches and writes about experimental critical writing, environmental humanities, theories of individuality and collectivity, and film and culture. Her book, Take Her, She’s Yours (Punctum Books, forthcoming), is a critical memoir about psychoanalysis, subjectivity, and feminism. Her previous book is The End of the World as They Knew It: Writing Experiences of the Argentine South (Bucknell UP, 2008).

Adam Morris is a writer and literary translator. His essays, criticism and translations have appeared in the Times Literary Supplement, Los Angeles Review of Books, Salon, The Believer, The Point, n+1, and elsewhere. He has translated novels by Hilda Hilst, João Gilberto Noll, and Beatriz Bracher, as well as shorter works by Nuno Ramos, Joaquim Maria Machado de Assis, Carol Bensimon, Vivian Abenshushan, and others. His first book, American Messiahs, is forthcoming in 2019 from Liveright/W.W. Norton.

Rodrigo Nunes is a philosopher. He is the author of Organisation of the Organisationless. Collective Action After Networks (Mute/Post-Media Lab, 2014) and is a Professor at the Pontifical Catholic University of Rio de Janeiro (PUC-Rio), Brazil. As an activist and popular educator, he has been involved in initiatives like the first editions of the World Social Forum (Brazil), the Justice for Cleaners campaign (London), and the Climate Camps in the United Kingdom. His new book, Beyond the Horizontal. Rethinking the Question of Organisation, is forthcoming with Verso (2019).

Jackie Orr is a teacher and performance theorist. She is Associate Professor of Sociology at Syracuse University, and the author of Panic Diaries: A Genealogy of Panic Disorder (Duke, 2006). Her recent work on magical subrealism, catastrophe and enchantment, and the slow violence of petro-culture has appeared in Catalyst: Feminism, Theory, Technoscience; Social Text // Periscope; and in the edited book Critical Trauma Studies (NYU, 2016). Her performance piece, Slow Disaster at the Digital Edge, has been presented at the University of Chicago, Goldsmiths, Stanford, and the Rhode Island School of Design.

Imre Szeman is a scholar of energy and environmental studies, critical and cultural theory, and social and political philosophy. He is University Research Chair and Professor of Communication Arts at the University of Waterloo. On Petrocultures: Globalization, Culture, and Energy is forthcoming this year.

Nomeda and Gediminas Urbonas are artists, educators and co-founders of Urbonas Studio: an interdisciplinary research practice that facilitates projects that transform civic spaces and collective imaginaries. In collaboration with experts from different cultural and professional fields, their projects merge a variety of materials and media, and span themes of urbanism and ecology. Gediminas is Associate Professor and Director of the MIT Program in Art, Culture and Technology in the School of Architecture and Planning. Nomeda is MIT research affiliate and PhD researcher at the Norwegian University for Science and Technology (NTNU).

Jeanne van Heeswijk is an artist who facilitates the creation of dynamic and diversified public spaces in order to “radicalize the local”. Recent notable projects include Freehouse, Radicalizing the Local in Rotterdam (September 2008- present) and Philadelphia Assembled in Philadelphia (2015-2017). Her work has been featured in numerous books and biennials such as those of Liverpool, Shanghai, and Venice. She was the 2014-2015 Keith Haring Fellowship in Art and Activism at Bard College and she has received the 2012 Curry Stone Prize for Social Design Pioneers, and in 2011, the Leonore Annenberg Prize for Art and Social Change. She lives and works in Rotterdam.

Marcel Van Der Meijs is an urban and environmental designer.  He is senior Urban Designer and partner at Palmbout Urban Landscapes in Rotterdam. His work connects the different scales of planning, landscape and public space to foster more holistic and sustainable cities. With Waterland Design Inc. he works in projects combining urban layout and water management for comprehensive climate resilient local solutions. For this work they won the Rebuild By Design competition project on Long Island, New York. He also works in projects on new imaginaries for public space, through collaborations between urban design and visual arts and has contributions to the Shanghai Biennial, China (2008), Cultural Capital Ruhr, Germany (2010), and Parckdesign Brussels Belgium (2012).

Snoweria Zhang is an architectural designer, researcher, artist, and mathematician. Currently, she conducts research at the MIT Senseable City Lab, focusing on mobility, future cities, and the boundary between human and technology. Her personal research interests include gender and space, bicycle safety, and the Supreme Court of the United States. She also illustrates a weekly comic about design and politics.